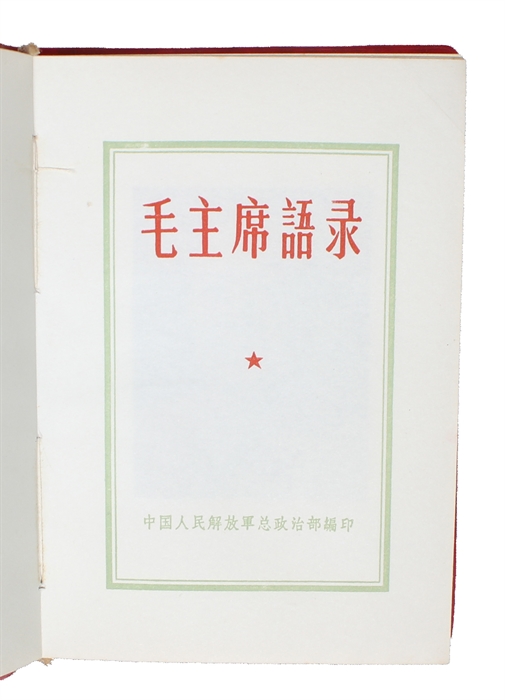 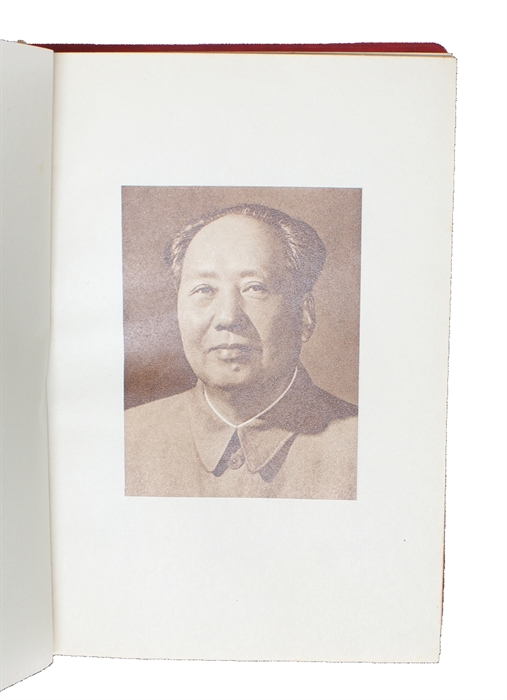 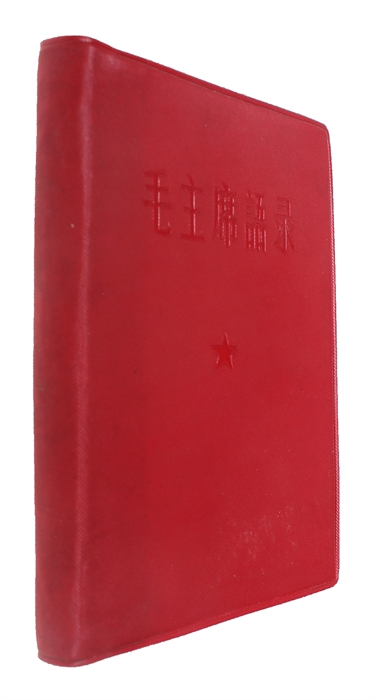 (Printed in China, August, 1965 [on colophon]). 12mo. Pages measuring 125 x 87 mm. Orig. red vinyl w. blindstamped lettering and star to front cover (the cover is made to fit around original blank paper-boards). Half-title printed in red, title-page in red and green, portrait of Chairman Mao, Lin Biao's endorsement leaf + 3, (1 blank), 2, 270 pp. + one leaf (colophon). An excellent, near mint copy, apart from some soiling to inside of back wrapper.

The rare first complete edition of Mao's Little Red Book (LRB). This is the third edition, upon which all subsequent versions and translations of the Little Red Book are based. Together with the bible this is the most printed book ever (it also holds the world record of most copies printed of a single work in under four years - 720 million copies by the end of 1967). With the rare (corrected) endorsement-leaf, which is usually lacking.

The third edition, here in the iconic red vinyl binding, contains the 33 chapters for the first time, as do all later editions. It is slightly smaller than both the first and second (which contains 32 chapters) editions, and it has the portrait of Mao from the first edition. It now contains 270 pages as opposed to 250 of the first edition and 260 of the second edition, and it has a colophon leaf. "As with the earliest printings it is published for the General Political Departm ent and intended only "for internal circulation". Copies appear in both printed paper wrappers and red vinyl plastic." (Oliver Lei Han, Sources and Early Printing History of Chairman Mao's "Quotations).

The idea of publishing this little book of quotations, which are taken from the first official edition of Mao's writings (his selected works vols. 1-4, printed 1951-60), came to Lin Biao in late 1963 or early 1964, by which time the four volumes of Mao's works had become the chief reading and source of knowledge within China. The little (red) book was meant as inspirational reading for the public, and for several years a campaign was promoted urging (or perhaps commanding) everyone to study the thoughts of Chairman Mao in this form. The short quotation form made the thoughts more easily accessible, and even uneducated people (like the soldiers) were able to become acquainted with the thoughts and philosophy of their leader.

Lin Biao wrote an endorsement, choosing three sentences from the diary of Lei Feng, which he wrote in calligraphic script. This endorsement leaf is lacking in most copies of all editions of the book due to political reasons: By heavily promoting the LRB, Lin Biao had greatly risen in importance within the Mao-hierarchy, and he was actually designated to become Mao's successor, -however, rumours occurred that Lin Biao was planning to assassinate Mao and take over power immediately, and thus he was killed. Due to the close relationship between Lin Biao and Mao, the betrayal was considered the more disgraceful, in fact so disgraceful that it was decided that he had to be erased from modern history. Thus it was decided and commanded that the endorsement leaf was to be removed from all copies of the LRB, and getting caught with not having torn this leaf out might very well have meant the death penalty.

"The LRB continued to be printed in huge quantities for mass distribution up until the time of Mao's death on September 9th, 1976. This brought about an official end to the Cultural Revolution (which had used the LRB as a frequent symbol). By the late 1970s a change in government discouraged its further circulation and millions upon millions of copies were collected and destroyed as obsolete paper even while the cult of Maoism continued. It was during the centenary of Mao Tse-tung's birth (1993) that copies were once again printed, this time as facsimiles in English, French and German being exact replicas dated 1966 and with "First Edition" printed behind each title-page. They can be easily distinguished by their bright shiny red laminated covers and the presence of colored photograph portraits near the front. As they can still be found all over China, most likely they have been printed again even more recently. No one denies Mao is the Father of his country, truly the last Emperor, a symbol of power and reverence who has been exonerated for the mistakes of his reign and consequently recognized for his achievements as hope for the future. His ideology forms a brilliant concept that is still readable and admired today for its political theories and strategies, and no doubt he would be very proud to know the effect he has had on his own country and the world will never forget him." (Oliver Lei Han, Sources and Early Printing History of Chairman Mao's "Quotations).