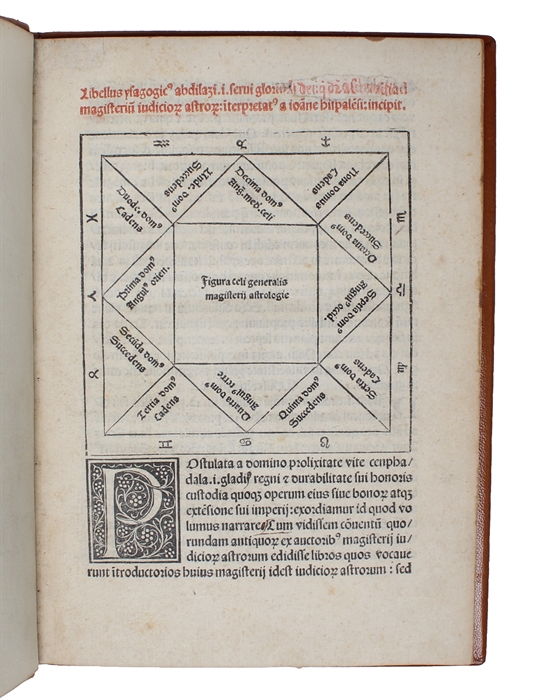 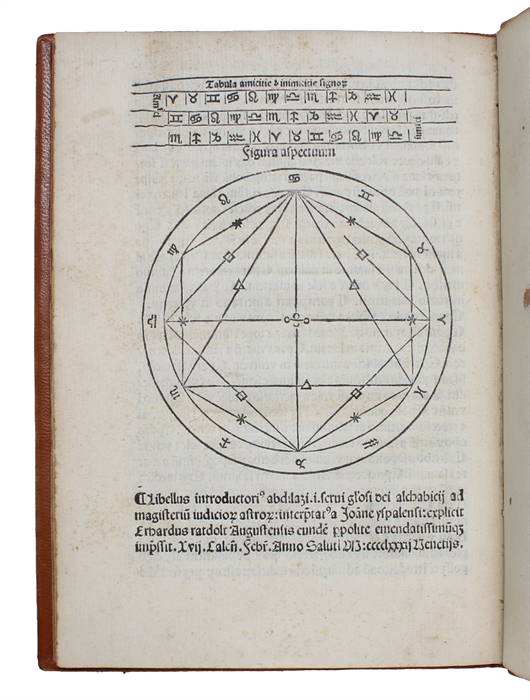 THE STANDARD INTRODUCTION TO ASTROLOGY IN WESTERN EUROPE

4to. 31 line to a page. 18th century full calf boards, expertly recased around 1900, with lovely gilt spine. Fist leaf with a small expertly repaired hole to the top, affecting the name of the author in the title and two words on the verso (name of the author presumably attempted removed on purpose). A small, barely noticeable restoration to the blank upper, inner margin of the first leaf. Apart from that an excellent copy with only light scattered brownspotting. A couple of contemporary corrections in the text. Title printed in red. Large woodcut diagrams to first and last leaf. Lovely woodcut initials and tables in the text. Good margins. 32 ff.

Scarce first Ratdolt-edition and second edition overall of the principal surviving work by the great Arab astronomer, astrologer and geometrician Al-Quabisi (fl. ca. 950). The work, which is an introduction to the fundamental principles of astrology, might not have been original in its contents, but its influence was profound and throughout centuries, it was highly valued as a textbook. The work was written in the 10th century and quickly became the standard introduction to astrology in Western Europe. With the emerging universities, Alqaubisi's "Introduction" became the most widely read book on astronomy in the middle ages. "By the mid twelfth century there was a shift away from the Cathedral schools to the emerging universities... With the establishment of curricula in the Faculty of Arts, and set texts for astronomy, al-Quabisi's text became the astrological text that was most commonly included in the syllabus."

"The date of this work is fixed by his use of the year 948/949 as a example in the fourth section... There are many Arabic manuscripts (including some in Hebrew script), although it was never found to need a commentary, and it was translated into Latin in 1144, and into French (presumably from the Latin) by Pelerin de Pousse in 1362. Johannes' Latin version was commented on by Johannes de Saxonia at Paris in 1331 and by V. Nabod in 1560, and was also the text commented on by Francesco degli Stabili, called Cecco d'Asoli, who lived between 1269 and 1327." (D.S.B.).

As is evident from the hundreds of manuscripts, translations, commentaries and, after Gutenberg, early printings, the work exercized an enourmous influence throughout both the Arabic and Western world. It was printed for the first time in 1473, and the present version of the work constitutes the second printing, by the eminent printer Ratdolt, who also made a reprint from the present edition in 1485. The work in its Latin version continued to be very popular well into the Reniassance, and numerous editions appeared throughout the 15th and 16th centuries.

"'Alcabitius' owes his reputation to a single work: his Book of the "Introduction to the Craft of Astrology", which survives in at least twenty-five Arabic manuscripts (two written in Hebrew script), and in a Latin translation of which there are more than two hundred manuscripts, and twelve printings between 1473 and 1521. The reputation of this text in the Islamic world was such that: according to the biographer, al-Bayhaqi (ca. 1106-74), it "ranked among the works on the stars like Hamasa among Arabic poetry". The Latin text received several commentaries, and was, in turn, translated into several of the European vernaculars. In the universities where astrology was taught (often as part of the curriculum in medicine), the "Introduction" was the first, and often the only, set text. Along with 'Albumasar', 'Alcabitius' became a household name as an authority in astrology." (From Charles Burnett's 2004-edition of the work).

"By the mid twelfth century there was a shift away from the Cathedral schools to the emerging universities... With the establishment of curricula in the Faculty of Arts, and set texts for astronomy, al-Quabisi's text became the astrological text that was most commonly included in the syllabus." (Fontaine, "Studies in the History of Culture and Science", pp. 48-49).

This excellent second edition of the work, from 1482, is of the utmost scarcity. We have only been able to locate two or three copies on OCLC, and only four copies at auction over the last 40 years.